About The Wildbird General Store

The Wildbird General Store™ has been a locally owned, independent, family-run business, since it opened its doors in 1990.

We are dedicated to promoting our love for nature, in our own backyard and yours.

“The Wildbird General Store is the best nature store I’ve ever seen, anywhere on the globe”

The Wildbird General Store™ was founded in 1989 by retired ornithologist Jack Clements, and his daughter Ellen. The store was the very first of its kind in all of Alberta, specializing in backyard bird feeding. Originally located in the Strathcona area beside Royal Pizza™, the store moved to its current location in south Edmonton in 1995. Jack sold the store to biologist Lu Carbyn and his wife Jaynne Carre in 2001, who expanded the business in 2009.

Steve Kulak and Kay Kozlowski, both former molecular biologists at the UofAlberta, bought three-quarters of the store in 2014 and took over full ownership in 2017. Steve is more than happy to answer any science questions you may have, whatever the topic. Kay has a knack for sourcing cool & interesting gifts and has garnered a following in the last few years, winning top spot in Vue Weekly’s Best of Edmonton gift shop in 2017 and 2018!

Considering themselves stewards on Jack’s behalf, the store remains true to its roots. In Jack’s words “It’s not a bird store. It’s a people store.” Read more about Steve & Kay in a feature by Prime Times Edmonton (photo by Nicole Lauzon). We’ve had many fantastic people staffing the store over the years. Jim Lange is our resident raptor expert.  He served 25 consecutive years on the Executive of the now Edmonton Nature Club (8 years as President of the former Edmonton Bird Club). Retired RCAF colonel Marc Demers and his grandson Marc Jr were fixtures over many years, we wish Marc the best in Calgary, and Marc Jr the best in his studies. We lost master owl bander Ray Cromie (aka OWLER1) in 2015, he’s deeply missed by all who knew his kind and generous spirit. Ray’s original hand-drawn saw-whet nest box design still hangs in the store.

We introduced our gnome mascot in the fall of 2015 with a name the gnome contest. “Wilbir” was suggested as Wildbird without the “d’s” and thus Wilbir the 4′ Gnome was born. Wilbir can be found sun-bathing outside the store except in the most inclement weather, and is more than happy to take selfies. Be sure to share them & tag us @WILDBIRD_YEG on Twitter or Instagram! #WILBIR #YEGgnome #WILDBIRD YOUR ORDER IN ADVANCE FOR CURBSIDE PICK-UP 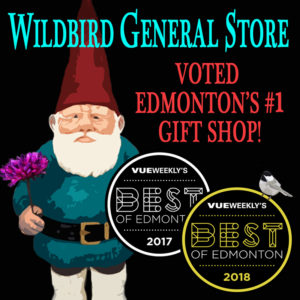